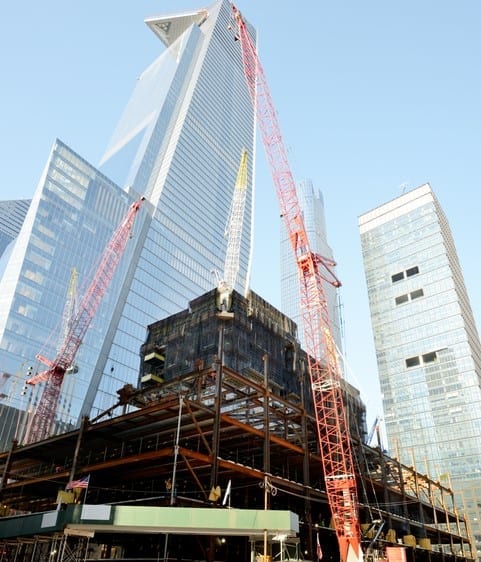 When four workers at New York’s sprawling Hudson Yards development project were injured in a scaffold collapse a few weeks ago, one New York newspaper said it appeared to be the first accident at the site since work began several years ago. Far from it, says an article in the Commercial Observer. The actual number is closer to 150. That much is clear, and if anything it’s likely to be an undercount, based on the number of lawsuits that have been filed. As for what this means, reactions are all over the map, and mostly but not entirely predictable. “The Reality is that construction is a dangerous industry,” says the Building & Construction Trades Council of Greater New York, which per its website consists of the local affiliates of 15 unions representing 100,000 workers in New York City. The BCTC battled developers over alleged union-busting last year, the Observer article notes, but apparently that issue has been put to rest. Meanwhile, while maintaining it takes all injuries seriously, the BCTC says it has ensured “the highest standards of safety” are met, and it notes that over six years, among a total of about 25,000 workers, the injury rate has been 0.005 percent. Others look at that record and see problems. “To have 150 cases out of just one spot, that’s certainly alarming,” says one personal injury lawyer, not involved in any of the Hudson Yards cases. He thinks the project is being hurried at the expense of worker safety. According to an official of a New York worker safety organization, high injury rates on a project often are the result of lack of initial training. But some sources aligned with developers and employers say that injury litigation is encouraged by a unique New York State law, commonly called the Scaffold Law, which assigns absolute liability under a range of circumstances they maintain are too broad and largely preclude making worker intoxication or failure to use safety equipment part of a defense. Under the Scaffold Law, says an official with the Building Trades Employers’ Association of New York City, liability is pretty much a given and the only question becomes how large the judgment will be. According to one industry source, because of the Scaffold Law, developers in New York are forced to spend 8 to 10 percent of their budget on insurance, compared to two or three in other states. How that works in practice is not so clear. The article notes that in one Hudson Yard’s case, a defendant attorney asked if a plaintiff “had previously received drug or alcohol counseling, brought up a 2012 car accident linked to his name (it was actually his father), how much he bench presses and slight discrepancies in his injury claims.” In any case, construction worker injuries and deaths been going up in New York and construction is said to be New York’s most dangerous industry.