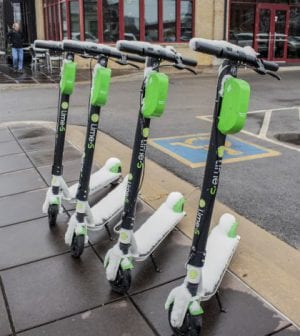 Lime, the global scooter company, has seen its scooters catch fire, break apart in use and be subject to a recall after a computer error caused “sudden excessive braking during use.” Now eight e-scooters in Brisbane, Australia have started making sexual demands on their drivers and uttering profanities when they fail to comply. “We are aware that a few Lime scooters in Brisbane have had their audio files changed by vandals recording over the existing audio file with inappropriate and offensive speech,” the company said in a statement. “It’s not smart, it’s not funny.” Hackers did not access the compromised scooters’ operating system. They broke into the vehicle’s audio file port physically, an act akin to changing the ringtone on your phone. According to Lime, modifying a scooter’s operating system would require expertise limited to very few people in the world. Nevertheless, some experts have raised concerns about the potential for e-scooters operating systems to be hacked, putting riders in grave danger. A potential hacker, using a Bluetooth-enabled app from nearly 330 feet away, could lock a scooter, deploy malware that could take full control of a device or target an individual rider, causing their scooter to unexpectedly brake or accelerate.
Read the full article at: