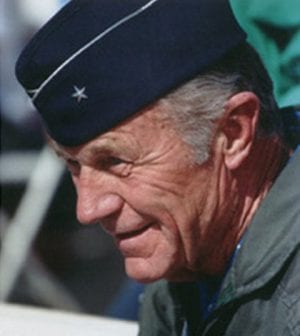 Chuck Yeager, legendary test pilot and the first pilot to break the sound barrier, has sued Airbus SE for trademark infringement. The company, in 2017, ran a website piece that included the CEO of its helicopter division saying that 70 years ago Yeager broke the sound barrier and now Airbus was trying to “break the cost barrier” with its new high-speed helicopter. Yeager has accused the company of trademark infringement and deceiving the public into believing he was endorsing the product. Yeager, now 96, became the most famous and admired pilot in recent history after being featured in Tom Wolfe’s book “The Right Stuff,” later made into a movie. This is not the first time Yeager has sued over infringement, nor is it his first legal entanglement with Airbus Helicopters. Reportedly the company had previously asked for permission to use his name in a press release, but the parties could not come to an agreement about money or control of the final product.