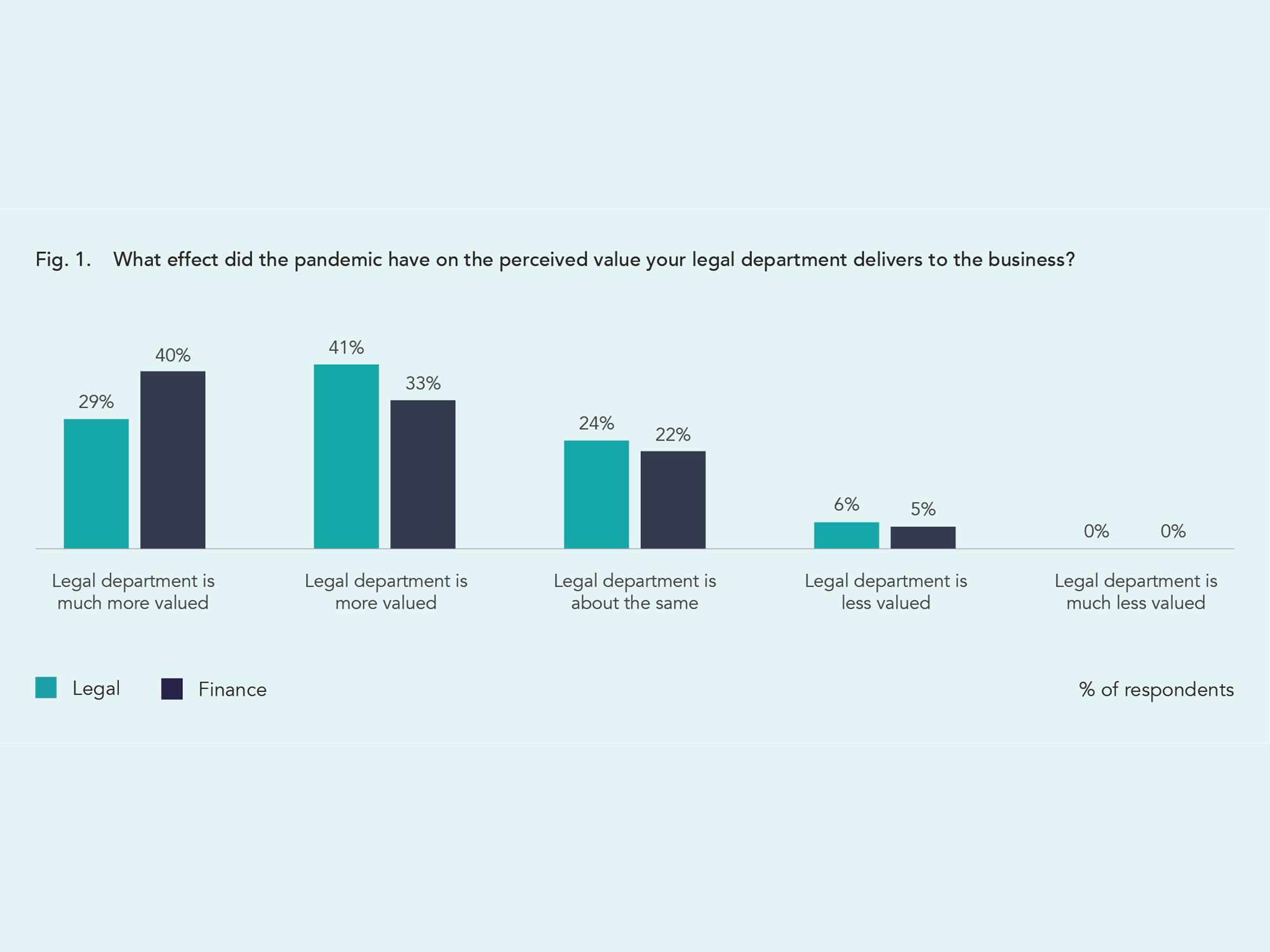 The Legal Spend Landscape for 2022, a recent survey of financial services firms commissioned by Apperio, indicates that in-house legal teams have a great opportunity to invest in the technology that their departments need next year. The survey polled 300 senior legal and financial professionals who have responsibility for legal spending across the United States and the UK. Collectively, respondents work for or with legal departments that employ an average of 22 in-house lawyers and oversee $14.28 million in annual outside legal counsel spending.

Legal departments are highly valued. Seven in 10 respondents polled said their in-house legal team was “more valued” (38 percent) or “much more valued” (33 percent) today because of their work during the pandemic. Finance leaders such as chief financial officers (CFOs) were even more generous in their assessment. An analysis of these responses by title shows that 40 percent said the law department was “much more valued,” compared with just 29 percent of respondents with roles such as general counsel and chief legal officer.

As one chief counsel for a private equity firm wrote in the open-ended comments, “the business had to face challenges it had never seen before.” The goodwill gained is being converted into additional investment in the legal department to continue delivering the desired legal outcomes in these uncertain times.

It’s not just the budget that’s needed to make the most of legal technology, but also the right talent. Accordingly, the survey found that 85 percent of respondents said their legal department has a person or team charged with leading innovation. About half of respondents said this was a full-time responsibility.

These roles are often filled by allied professionals — people with the skills and experience to help lawyers put process and technology in place. Here again, financial leaders such as CFOs (50 percent) were more likely to favor hiring allied professionals than their peers in legal (43 percent).

CFOs are the arbiters of corporate spending and have earned a reputation for questioning budget increases. However, they’re inclined to put their finite resources into those areas they think will deliver the most benefit to the firm. A tech-enabled legal department in these times of uncertainty meets that qualification.

There is a well-defined need for legal tech. Most successful tech projects begin with one key element: a well-defined need. To that end, two findings in the survey help provide such a rationale. First, workload, headcount and legal costs have all grown over the last three years: 70 percent say the legal workload has grown; 66 percent say the legal department’s headcount has grown; and 67 percent say legal costs have increased.

Second, respondents said the top priority for their law department over the next 12 months is controlling costs (60 percent). The only way to get more work done while also controlling costs is to find a more efficient way to do the work. That indicates a clear need for enabling legal tech projects.

The survey highlights a list of tools that lawyers in financial services aim to implement next year. These suggest that there are numerous strategic opportunities, ranging from data and analytics to matter management, and tactical opportunities like contract management, all of which bring automation to the legal workflow.

The uncertainty brought on by the global pandemic has caused businesses to realize, to a greater degree, the crucial role the in-house legal team plays in successfully navigating risk. As the volume of work has grown, business leaders are more than willing to provide the resources their legal departments need to improve operations. In-house teams are well positioned to parlay the goodwill they have earned, and the willingness of their organizations to continue investing in the department, to take their legal departments to the next level of maturity.

Nicholas d’Adhemar is the founder and CEO of Apperio, a legal spend analytics and matter tracking platform for in-house counsel. Before starting Apperio, he spent six years working as a lawyer, one year as in-house counsel, and another three years as an investment manager with a private equity firm.