Gun-Tracing In The U.S Is From Another Century 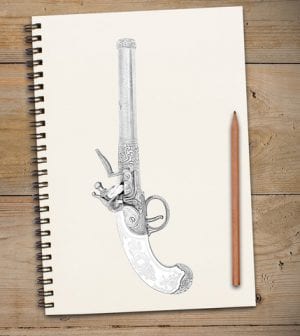 It’s no accident the U.S. has an archaic system for tracing guns, according to documentary film maker David Freid, whose work on the subject is up for an Emmy. “The technology that we use is largely designed to prevent us from being able to create the registration system,” he says. The Atlantic magazines’s Emily Buder, in her short piece about it, calls the system “Kafkaesque,” and that seems about right. Franz Kafka wrote in the early 20th century about, among other things, a world of labyrinthine paper and file cabinet-based offices, and that’s more or less what the U.S. has to keep track of the many millions of firearms purchases within its borders. Except it’s mostly boxes, not file cabinets. “Once we exceed 10,000 boxes inside the building, there is some concern that the floor might collapse, so consequently we started moving stuff to shipping containers out in the parking lot. I’d say there are at least 29 shipping containers out here in the parking lot right now,” says Special Agent Charles J. Houser of the Bureau for Alcohol, Tobacco, Firearms, and Explosives, who runs the facility. There is a link to the film here, in its entirety, and it’s hard to say whether it’s comedy or tragedy, but you will almost certainly watch it to the end. It’s only 10 minutes long.