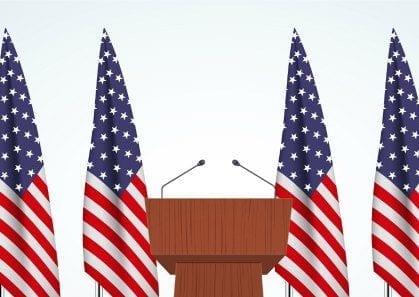 The Constitution is clear. Trump’s term will end on January 20. Next in line is the VP, but his term also ends on January 20. At that point, says University of Michigan Law School professor Richard Primus, things get “weird.” By statute, next in line is the Speaker of House, but without an election there is no House. The terms of all the representatives will have expired. Next in line is the president pro tempore of the Senate. That office would not be vacant and per established practice it goes to the most senior member of the majority party in the Senate. Without an election that would be the Democrats, because they make up 35 of the 65 senators whose terms continue past 2021. Democrats could choose anyone legally qualified to be president – even, “if they were in a mood to right historic wrongs,” Hillary Clinton or Al Gore, Primus says – but they most likely would go with Biden. “To be clear: None of this is going to happen. The House of Representatives under Nancy Pelosi is not going to approve a bill to postpone the election, and the Republican-controlled Senate wouldn’t want to do it either. Maybe Trump hasn’t fully thought through who would legally be entitled to the presidency next January if no election intervenes, but it’s a good bet that Senator Mitch McConnell has, or at least that he would, long before any bill to postpone the election came to a vote.”