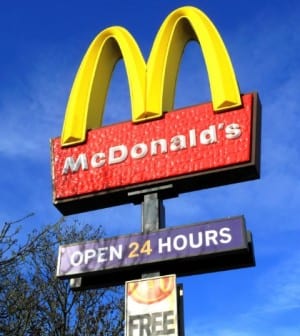 The Oxford English Dictionary began including the term “McJob” in 2001, citing usages as early as 1986, and defining it as “an unstimulating, low-paid job with few prospects, especially one created by the expansion of the service sector.” The term was included in the 11th edition of Merriam-Webster’s Collegiate Dictionary two years later. Neither dictionary specifically mentioned McDonald’s, but in 2003, McDonald’s CEO Jim Cantalupo, wrote an open letter to Merriam-Webster, which was published in Nation’s Restaurant News, suggesting that the word be removed, calling it “a slap in the face to the 12 million men and women who work hard every day in America’s 900,000 restaurants.” The dictionaries ignored his suggestion. Representatives of the company in the UK then threatened a lawsuit, but never pulled the trigger. Instead McDonald’s senior vice president David Fairhurst argued for a new dictionary definition of the term: “A job that is stimulating, rewarding and offers skills that last a lifetime.” The dictionaries didn’t budge. In the end the company settled for an ad campaign touting the benefits of working for the company, using the terms “McFlexible,” “McDiscounts,” and “McProspects.”