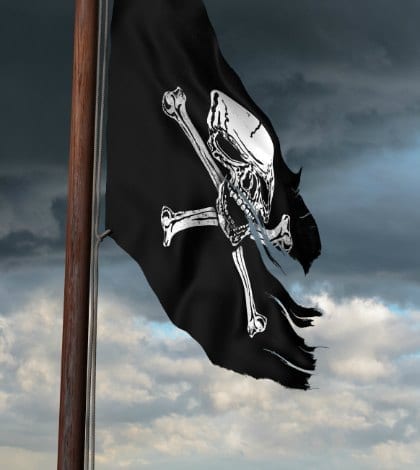 In the 1990s cinematographer Rick Allen shot footage of researchers salvaging the pirate Blackbeard’s flagship, Queen Anne’s Revenge, which ran aground off Beaufort, North Carolina in 1718. Allen registered his work with the U.S. Copyright Office. In 2013 North Carolina’s Department of Natural and Cultural Resources posted a few images of the shipwreck on its website and Allen accused the State of copyright infringement. North Carolina settled, but then posted five short videos and one photograph from the recovery expedition. Allen filed suit. In response, North Carolina passed a law – Allen calls it “Blackbeard’s Law” – that treats all photographs, video recordings, and other documentary materials of a derelict vessel or shipwreck or its contents as “public record.” Can North Carolina insulate itself from liability by putting copyrighted work in the public domain? The Fourth Circuit said yes, but the Supreme Court is inviting briefs before deciding cert. The Recording Industry Association of America says that thanks to recent decisions, congressional remedies have been nullified, and “States are once again free to engage in copyright infringement, no matter how widespread or blatant, without fear of having to pay any money as a result.” The brief claims that copyright infringement by States is “once again a very serious problem.”