Supreme Court Will Severely Restrict Abortion – With Or Without Kavanaugh 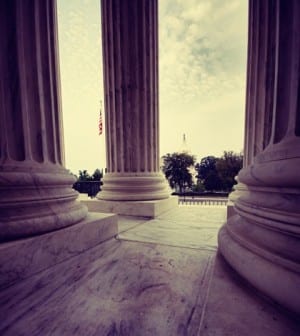 In the only case Brett Kavanaugh decided involving abortion, he vacated an order directing that a young woman who found out she was pregnant while in government custody be allowed to access abortion. A federal court had ordered the Trump administration to allow the procedure. The administration appealed, and Kavanaugh wrote an opinion that let the government to continue to block her, but he was quickly reversed by the entire D.C. Circuit. In the event Kavanaugh is not confirmed, Trump will likely make good on his promise to only nominate potential Supreme Court Justices who are anti-abortion. If the Senate confirms a nominee who shifts the balance, and the court overturns Roe v. Wade, many states, by some counts about half, will ban abortion immediately. Seventeen states already have laws on the books to accomplish this swiftly. But a new Supreme Court Justice could effectively decimate women’s access to abortion, even without overturning Roe. A new Supreme Court could, and probably would, uphold nearly unlimited state restrictions, thus making abortion impossible within the states that pass them. Right now, in seven states there is just a single women’s health center left providing abortion care. The only thing stopping politicians in those states from shuttering those clinics with fake health regulations is the federal judiciary, and if the balance on the Supreme Court shifts against abortion rights, there will be nothing stopping them.
Read the full article at: