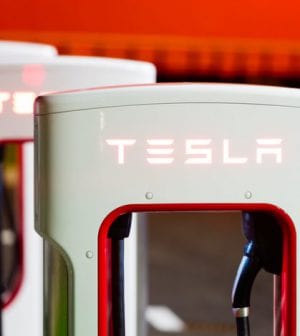 Liliana Awan, widow of Omar Awan, has filed a lawsuit against Tesla Motors Inc., alleging that her husband died as a result of the vehicle’s battery catching fire and automatic door handles that stopped rescuers from pulling him from the burning vehicle. The Awans leased the Tesla after considering a Mercedes, but deciding that a battery-powered engine would be safer that one that used gasoline. A police officer arrived at the scene of the accident quickly, but according to the suit the car’s retractable door handles, which are supposed to “auto-present” when they detect a key fob nearby, malfunctioned, making it impossible for anyone on the outside to open the doors. Smoke and flames filled the car while a crowd that had gathered outside stood helplessly and watched. The attorney representing Awan said Tesla has yet to respond to the lawsuit. He pointed to other instances in which fires were caused as a result of the car’s battery and said that Tesla vehicles should have a built-in fire retardant so drivers and first responders can have the tools to fight the flames. After firefighters extinguished the blaze, the Tesla was transported to a tow yard where it reignited and burned again.