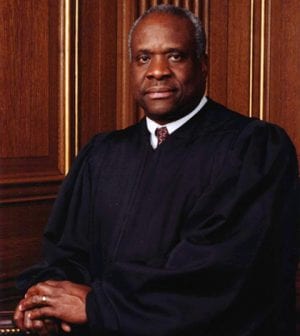 In a review of two recent books about Clarence Thomas, Michael O’Donnell writes that the first thing to know about the enigmatic Supreme Court Justice is that everybody at the Supreme Court loves him, a surprise given his public persona and near-total silence during oral arguments. Thomas is a jovial presence among his colleagues, janitors and law clerks as well. But this buoyancy, writes O’Donnell, marks a man whose career as a judge is a study in brutalism. The second African-American Supreme Court justice, successor to Thurgood Marshall, Thomas opposes policies that seek to combat discrimination and disfavors integration. A former black activist and onetime follower of Malcolm X, he champions a criminal-justice system suffused with racism, and routinely rejects claims of cruel and unusual punishment made by prisoners. But his most uncomfortable contradiction, writes O’Donnell rests on an abstraction. An originalist, he purports to interpret the Constitution as the Founders understood it in 1789, when the Founders wrote slavery into the Constitution’s text. He is also taken to task for his retrograde view of women, epitomized by the Anita Hill episode during the Judiciary Committee hearing on his nomination.