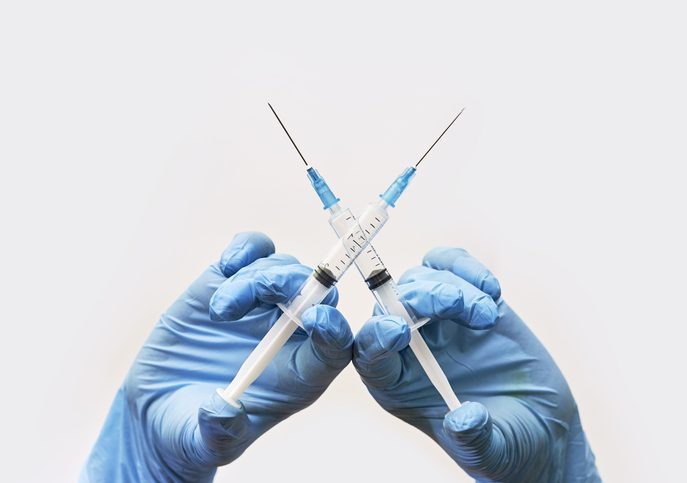 Four plaintiffs, all highly-paid professionals, have filed a putative class action against Bristol Myers Squibb, claiming they were wrongfully denied religious exemptions to the company’s Covid vaccine mandate and told they would be fired if they refused to be vaccinated. One of the plaintiffs is an M.D., identified in the complaint as Head of Clinical Trial Risk Management for Global Drug Development. She maintains that getting vaccinated “would permanently destroy my relationship with My Savior, prevent eternal salvation, and promise eternal damnation of my soul as it is described in the Bible because I would be accepting the Beast as my Savior.” She says the company denied her accommodation request even after she offered to work remotely and that she  would “welcome any other ideas on how to accommodate her faith.”

The corporate titles of the other three named plaintiffs are Associate Director of Strategy and Submissions Lead, Patient Safety, and Epidemiology; Senior Manager for Data Integrity; and Account Manager in the company’s Apheresis Operations division.

The plaintiffs’ contentions vary in their details, but overall the claim is that the company responded to their accommodation requests by attempting to poke holes in their stated religious positions, e.g., by asking if they received other vaccinations, if they had tattoos, drank alcohol, etc. The objections of one plaintiff included his understanding that fetal cell lines were used in the design and development of Covid vaccines, and he was asked by the company if he used common products such as Tylenol and Pepto Bismol, which the company said had also been tested on fetal cell lines, and if he would promise not to use those products in the future. (He replied that he only became aware of the fetal cell line three years ago, “which caused him to repent from unknowingly taking fetal cells into his body,” and, no, he no longer used them.

The lawsuit, filed in U.S. District Court for the Southern District of New York, says the way the company applies its vaccine mandate is in violation of federal law, specifically Title VII of the Civil Rights Act of 1964, although the complaint begins with an epigraph from the Greek playwright Sophocles: “I never thought your announcements could give you – a mere human being – power to trample the gods’ unfailing, unwritten laws. These laws weren’t made now/or yesterday. They live for all time.”

Per a PR release sourced to We The Patriots USA, Inc.,  the lawsuit was made possible through that group’s support, and the plaintiffs are being represented by Cameron Atkinson, Of Counsel to We the Patriots and an attorney with law firm Pattis & Smith.