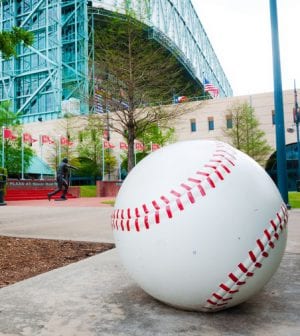 The mascot of the Houston Astros, named “Orbit” as homage to Houston’s space industry, was shooting t-shirts into the stands out of an air gun when one of them allegedly injured a spectator. According to the woman’s lawsuit it stuck her hand, sending her to the ER, and the injury subsequently required surgery, the insertion of two screws, and a second surgery to remove them. One of her attorneys tells the Houston Chronicle that when they initially went to the organization and asked for medical expenses, they were “directed to the general counsel, and he basically said ‘file your lawsuit.’ He asked for it, and he got it.” The Chronicle notes that a stipulation with Major League Baseball tickets states in part that the ticket holder “assumes all risk and danger incidental to the baseball game, and all other activities, promotions or events at the Ballpark before, during and after the baseball game, including, but not limited to, the danger of being injured by baseballs, equipment, objects or persons entering spectator areas.” The plaintiff attorney acknowledges the waiver, but maintains no waiver covers “the risk of having someone fire a cannon at you that creates that much force at that proximity that can cause that kind of damage.”