Years of ADA Shakedowns Alleged, And A Law Firm Settles 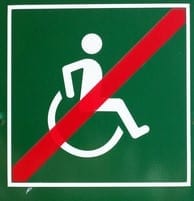 A Silicon Valley law firm has settled a lawsuit alleging that it was shaking down small businesses by filing lawsuits for minor and in some cases bogus Americans with Disabilities Act (ADA) violations and then extracting settlements. According to a recent report in The Mountain View Voice, the now-closed Mission Law Firm, whose principals were Tanya Moore and her ex-husband Randy Moore, filed hundreds of ADA suits over a period of years, targeting among others small businesses in the San Francisco Bay area. Some are said to have been driven out of business. The plaintiff attorney in the lawsuit, which alleges the defendants could be prosecuted under the Racketeer Influenced and Corrupt Organizations (RICO) Act, is Moji Saniefar, formerly with Orrick, Herrington & Sutcliffe and now principal at Saniefar Law, which per its website practices in commercial litigation, business counseling, and internal investigations. Another article in the Mountain View Voice, from the time the lawsuit was filed in 2018, reported that Saniefar was drawn to the case after her father’s restaurant in Fresno was sued in 2014, by a plaintiff who said he was disabled and found himself trapped in the restroom. Saniefar and her parents decided not to settle, instead hiring a private investigator who was able to provide video evidence that the plaintiff, who was the brother of Randy Moore, was able to walk on his own. A federal judge dismissed the case. Saniefar then went on the offensive with her lawsuit, alleging that Mission Law had engaged in a pattern of filing fraudulent lawsuits, in concert with a group of plaintiffs and disability consultants that included family members, and that often their targets were small businesses owned by immigrant families. The settlement of the current suit, terms of which were not disclosed, came shortly after the court had ordered the defendants to produce more than 70,000 emails and other documents. Contacted by the Mountain View Voice following the announcement of the settlement, Saniefar said she could not comment.